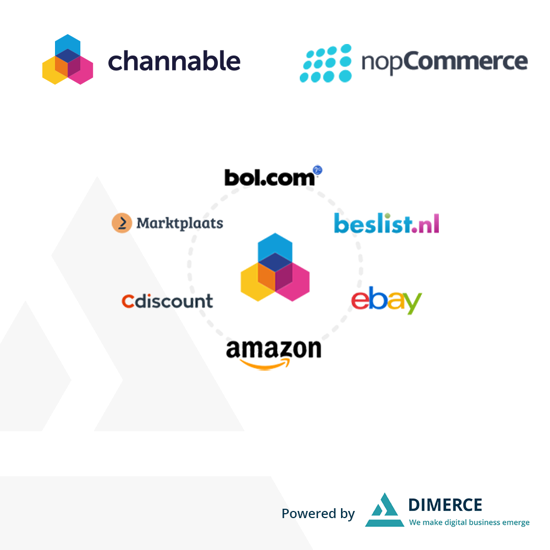 Channable is a feed-management tool, a powerful one... Connect with over 3.500 preset export channels and marketplace with just a few mouseclicks. Channable offers connections with the big marketplaces like Amazon, Google, Bol.com, eBay, Facebook.com, and many more. At the same time Channable offers users great flexibility when it comes to feed-management. You can apply all sorts of rules and logic to your product feed to optimize for all your marketing activities.

Need help to set-up/improve your Channable account? DImerce's marketing team has got you covered, just contact us and we can help you out!

Features of this plugin

The list of features is divided in 3 groups: import, export & update.

We don't want you to struggle with importing your complete nopCommerce catalog in Channable. To help you out:Our product feed generation works seemlessly on stores with over 70.000 SKU's, so don't worry about performance.

Orders placed on Amazon, Bol.com, etc.? Through the Channable API we can import all you orders in nopCommerce, some of the features that will help you:

Updates from nopCommerce to Channable

So, now that we've covered everything about products and orders, let's talk about some details:

The price for this plugin is an annual subscription, for this we make sure to: